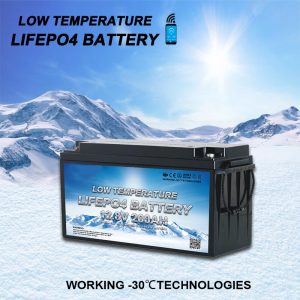 When it comes to powering RVs, boats, golf cars and electric vehicles, or providing storage for solar power systems, ALL IN ONE lithium iron phosphate batteries offer several advantages over lead-acid batteries. They have longer life. They are lighter weight, and yet have a higher capacity. They require no maintenance and can be mounted in any direction. They also charge faster, and don’t require a full charge before they can be stored or used.

Lithium iron phosphate batteries can be safely discharged over a wide range of temperatures, typically from –20°C to 60°C, which makes them practical for use in all-weather conditions faced by many potentially cold temperature applications including RVs and off-grid solar. In fact, lithium-ion batteries have much better performance at colder temperatures than lead-acid batteries. At 0°C, for example, a lead-acid battery’s capacity is reduced by up to 50%, while a lithium iron phosphate battery suffers only a 10% loss at the same temperature.

The Challenge of Low-Temperature Lithium Charging

When it comes to recharging lithium-ion batteries, however, there’s one hard and fast rule: to prevent irreversible damage to the battery, don’t charge them when the temperature falls below freezing (0°C or 32°F) without reducing the charge current. Unless your battery management system (BMS) communicates with your charger, and the charger has the ability to react to the data provided, this can be difficult to do.

What’s the reason behind this important rule?

When charging at above-freezing temperatures, the lithium ions inside the battery are soaked up as in a sponge by the porous graphite that makes up the anode, the negative terminal of the battery. Below freezing, however, the lithium ions aren’t efficiently captured by the anode. Instead, many lithium ions coat the surface of the anode, a process called lithium plating, which means there’s less lithium available to cause the flow of electricity and the battery’s capacity drops. Charging below 0°C at an inappropriate charge rate, also causes the battery to become less mechanically stable and more prone to sudden failure.

The damage to the battery when charging at colder temperatures is proportional to the charging rate. Charging at a much slower rate can reduce the damage, but this is rarely a practical solution. In most cases, if a lithium-ion battery is charged below freezing even once, it will be permanently damaged and must be safely discarded or recycled.

In below-freezing conditions, without a BMS communicating to a charger that is programmed to reduce current when necessary, the only solution has been to heat the batteries to above freezing before charging, either by bringing them into a warmer environment or by wrapping them in a thermal blanket or placing a small heater near the batteries, ideally with a thermometer to monitor the temperature during charging. It’s not the most convenient process.

To solve the problem of charging and to make lithium-ion batteries safer and more practical for low-temperature use, ALL IN ONE has developed a new series of lithium iron phosphate batteries that can charge at temperatures down to -20°C (-4°F). The system features proprietary technology which draws power from the charger itself, requiring no additional components.

The entire process of heating and charging is completely seamless for the user. Simply plug the battery in to the regular lithium-ion charger and the internal heating and monitoring system takes care of the rest.

Because it takes time to heat the cells, the charging process in below freezing temperatures will take a little longer. For example, with the low-temperature ALL IN ONE LT 100Ah battery, it takes about an hour to warm from -20°C to +5°C before charging begins. Over a smaller temperature range, heating to a safe charging temperature happens proportionately faster.

ALL IN ONE low-temperature series look and operate exactly like our other batteries, with the same power and performance. They have the same charge time at above-freezing temperatures. They also have the same dimensions, configuration, and connectivity of its standard counterparts, so they are drop in replacements in applications that already use ALL IN ONE batteries. And they’re ideal upgrades for those who are still using lead-acid batteries in low-temperature environments.

With AIN LT Series batteries, users who sometimes face below-freezing temperatures can now enjoy the many benefits of a lithium battery without having to worry about warming the battery before charging. They feature the same size and performance as ALL IN ONE standard lithium deep cycle batteries, but can safely charge when temperatures drop as low as -20°C using a standard charger. They're an ideal choice for use in RVs, off-grid solar, electric vehicles, and in any application where charging in colder temperatures is necessary.

Current products within the LT Series:

AIN100-LT: deal choice for use in RVs, off-grid solar, electric vehicles, and in virtually any application where charging in colder temperatures is necessary.

Note: We are a battery manufacturer. All products do not support retail, we only do B2B business.please contact us for product prices!
Categories: News